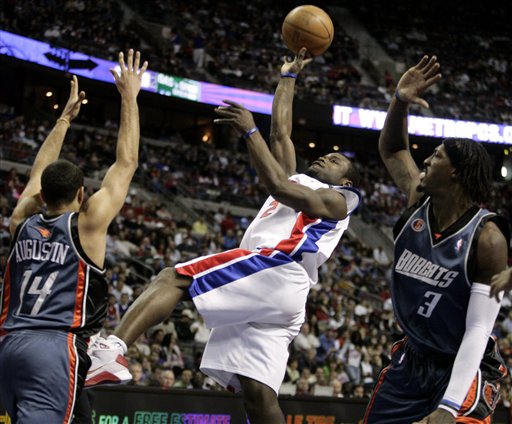 1.  Aaannd CUT!  That’s a wrap on the Bobcats’ playoff chances.  The Cats can’t execute down the stretch again and drop a must-have game against the Pistons Sunday night, 104-97.  AP story here, box score here.  The Cats drop to 34-43 and are now a full three games behind Detroit and Chicago, who are tied for 7th place.

2.  Without Raja Bell, Larry Brown went with Cartier Martin as the starting 2.  Tough matchup against Rip Hamilton for the rookie, and Brown must not have liked what he saw, as Cartier never saw the floor again after his initial 9 minute stint.  Dontell Jefferson made his Bobcats/NBA debut with 9 minutes in Raja’s spot in the second quarter.  Radmanovic started the second half in the spot; then in the fourth quarter, the extra minutes went to DJ.

Sensing a theme here?  No one could quite fill Raja’s shoes.  On a crucial night, we needed one of the guards to step up and no one did.

3.  The Bobcats came out of the gates hot, hitting their first four shots for a 10-2 lead.  However, things would quickly cool off and the Bobcats eventually found themselves down by 17 midway through the second quarter.  They clawed their way back and went into halftime down 51-44, then overtook the Pistons in the third, taking a one point lead into the final period, 69-68.

4.  Then the fourth quarter happened.  Thus far, I’ve buried the lead, which is that Will Bynum singlehandedly finished off the Bobcats tonight.  It would be one thing if Chauncey Billups, Rip Hamilton, Tayshaun Prince and Rasheed Walllace came together to shut down the plucky Bobcats, but it was nothing like that.

Chauncey’s been traded to Denver; Rip was ejected after picking up his second technical at the end of the third period; Prince had a quiet 14 points and a -4 +/- for the game, and Rasheed was rusty and pretty quiet himself (12 points, 6 rebounds).

Will Bynum, formerly of the Roanoke Dazzle and Maccabi Tel Aviv, obliterated the Bobcats by scoring 26 points in the fourth quarter.  The Bobcats as a team had only 28.  Only a few of Bynum’s points were on jumpers; most of them came after Bynum blew by DJ Augustin and either got a layup, got fouled, or both.  I suppose this performance may answer the question: Why isn’t DJ playing more in the fourth quarter?

Bynum set two records in the process.  He set a new career high with 32 points (25 was his previous best).  And his 26 in the fourth represents a Pistons record for points in a quarter.

5.  Meanwhile, the Cats couldn’t get anything sustainable going.  DJ and Boris both missed a couple of threes apiece, any one of which would’ve been huge.  Again, no one seemed to be able to figure out how to get Gerald Wallace involved; he eventually fouled out.

The closest the Cats got was within 3 a couple of times with under a minute left; but each time, the Pistons were able to get the ball in Bynum’s hands.  By this point, he was locked in and hitting his free throws like they were afterthoughts.

7.  Well, this dalliance with the playoffs was very fun while it lasted.  Next game is the last home game of the season — Tuesday night against the Sixers.