As Fake Sinatra said to Steve & Edie: “Listen, it’s up to you.  You can either open for me at the Meadowlands or headline at the Tick-Tock Inn!”

The Meadowlands (recently renamed The Izod Center) closed up shop after nearly 30 years Monday night with the Charlotte Bobcats taking care of business against the cellar dweller Nets 105-95.  With Miami winning on the same evening, the ‘Cats are now locked into the East’s 7th seed and will take on the Magic in Orlando on Saturday after wrapping up the regular season against Chicago on Wednesday.

Welcome to the NBA, Gerald Henderson

The Bobcats get an amazing 50 points from the bench in this one as Gerald “The Sequel” Henderson led the way with 14 on 6-9 shooting in just 21 minutes of action.  This wasn’t garbage time folks (well, unless you consider any minute played against the Nets “garbage time”).  Henderson filled in nicely for Crash by throwing down a couple of monster dunks, connecting on an acrobatic, double-pump reverse layup, rejecting a Brook Lopez shot and grabbing seven boards.  Nothing against Terrence Williams, who was taken one spot ahead of Henderson and who had an excellent game himself (21 points, 13 boards and 6 assists in 41 minutes) but for the first time all season it seemed as if Henderson belonged in the League.  He looked confident and asserted himself at both ends of the court.  This looks promising.

The rest of bench brought their A-game as well.  DJ shot the ball well again (5-7) and dropped a beautiful 18 footer over Lopez’s outstretched as if to say “I know you should have been the pick but not on this play!”  Stephen Graham had his bi-monthly Stephen Graham baseline drive and dunk, Tyrus Thomas shot the ball poorly (he did have a semi-cast on his thumb) but played hard and got to the line (5 attempts) in 20 minutes of action.

Theo Ratliff got the start tonight and really affected the game on the defensive end early.  Dude blocked two shots in two minutes (after the Nets TV team referred to him as a previously effective defensive player) and pulled down three boards.  The problem with too much Theo Ratliff is when he starts affecting the game from an offensive standpoint.  Theo was credited with only one Turnover but I counted three.  If Gana Diop and Emeka Okafor started a “Big Man Hands Camp,” Theo Ratliff would be their first product.

Nazr Mohammed got a little burn afterwards and looked slow defensively and out of synch offensively.  We might not be seeing the Nazr from earlier in the season again, folks.  At least not until next year.  Fortunately Tyson Chandler has looked very solid in the last few weeks and it looked like Larry Brown was saving Chandler’s legs for the first round matchup with Superman.

Until next time, Enjoy the Win Bobcats Fans… 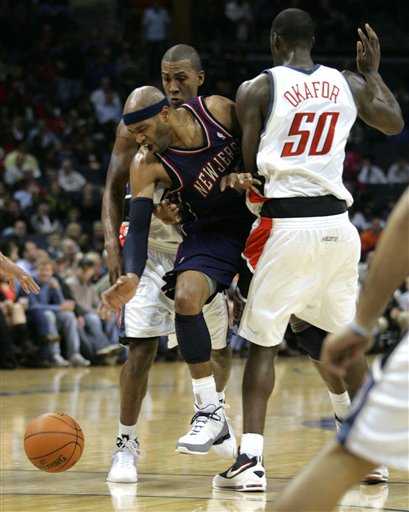 Although both teams were tied at the end of the first half and were tied and the end of the second half, the overtime session was removed from any of the ten players on the court. The Bobcats missed several close range shots, and the Nets hit a few open baskets to start the extra period. Just as the Bobcats started to close the gap, with the crowd on their side, things just fell into the judgement of the officiating crew. (Note : Referee Mark Wunderlich can Wunderlich my balls)

The stripes dictated this game based upon the past or perceived accomplishments of Nets stars Vince Carter and Devin Harris. (Btw, how many championship rings do those guys have?) Star recognition was a big factor for the Nets not only in overtime. Harris and Carter were somehow involved in enough plays to get 26 and 28 respectively, but inexplicably they only combined for 2 fouls. I think Tim Donaghy would be proud. Devin Harris certainly has been playing like an All-Star for about eight weeks, but it’s a bit early for him to get to the line every time he misses a shot. Harris is a solid point guard, but his stats in this game were bloated by the whistles that surrounded his defenders. Vince Carter is about 65% of the player he used to be but that really doesn’t matter when you still get 100% of the whistles that the refs used to blow for you.  Ok, enough of that. . .

Offensively, the Charlotte Bobcats just didn’t have enough to demand the respect of the referees. Emeka Okafor struggled to establish himself posting up. His shots fell short and it appeared that most of that was caused by his less than adequate jumping. Back-to-backs look to wear on him. Boris Diaw never impacted the game after the first half. He had some impressive drives into the paint, but nothing worked for him in the second half.

Throughout the first half, Raja Bell led the Cats on offense. He exploited the Nets’ failed defensive rotations and made the most of each mismatch. Bell went out in the 3rd quarter with an injury, and didn’t return. For several plays the Bobcats looked sloppy on offense, and didn’t find a rhythm until the Nets had a strong lead going into the fourth.

Gerald Wallace took over the game after Bell’s injury. While he had scored 16 points in traditional Gerald Wallace fashion through the first 3 quarters, he switched to GForce for the fourth and carried the Cats to overtime. Raymond had several untimely turnovers, but really came through with a three point play to tie the game at 96 with seconds left in the fourth. A good crowd came out for the game, and this must have confused the officials. They must have thought that there was no way they could have been in Charlotte. The Nets seemed to have the home court advantage from then on.

Several tough calls against the Bobcats followed and when Josh Boone steamrolled over Gerald Wallace on a late Nets possession, Wallace was called for his 6th personal foul and the steam had boiled over. Wallace received a technical in his reponse to the call, and the Nets received credit for the Vince Carter shot that followed the whistle away from the ball.

Interestingly, Yi Jianlian never really stretched the offense for the Nets. His skills seem to better set for role like Dirk Nowitzki. The Nets appear to need much more from Yi inside. Early in the 3rd quarter Okafor threw down an vicious dunk on Yi. Down the court on the next play, Yi attempted to return the favor but it ended embarrassingly with a block by Emeka. Within a few minutes of play, Yi entirely air-balled an 18 footer. His next foul (4th) saw him pulled by Lawrence Frank never to return in the game.

NBA.com posted an article about Diaw and Bell’s involvement in Charlotte’s improvement.